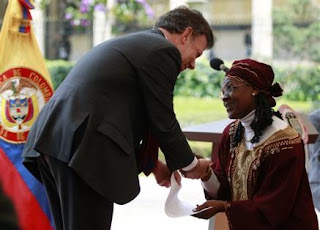 AP - lunes, 27 de septiembre, 22.04 Colombia's President Juan Manuel Santos, left, shakes hands with Yolande Mukagasana, survivor of the Rwanda's 1994 genocide at the presidential palace in Bogota, Colombia, Monday, Sept. 27, 2010. Mukagasana was invited as a special guest to a ceremony in which Santos proposed a law that will benefit victims of Colombia's long-running conflict with the Revolutionary Armed Forces of Colombia, or FARC, including peasants stripped of land. (AP Photo/Fernando Vergara)
Posted by bene rwanda at 12:36 PM No comments:

Fabrizio BORRELLI
Posted by bene rwanda at 9:08 AM No comments:

Posted by bene rwanda at 7:59 PM No comments:

THE GARDEN OF THE RIGHTEOUS IN PADOVA/4 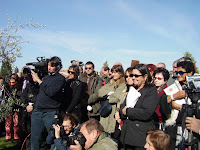 
After the opening, we moved to the upper part of the park, near to the bank, and the honour ceremonies began. The ceremony is divides into four phases:

1. a student of Padua schools reads on the microphone the reasons of the prize;
2. after reading the reasons, the Righteous (or one of his/her relatives) makes a speech to the presents;
3. afterwards, he/she unveils the stele in his/her honour;
4. and, at the end, the student and the Righteous plant the tree dedicated to him/her.

The first one who received the prize has been our Zura Karuhimbi who, during Rwanda genocide, heedless of the risks and the threats she was personally facing, hosted in her house many Ruandese people of the Tutsi ethnic group, feeding them and rescuing them from a certain death by the Interhamwe extremist troops. In front of a wide public, of photographers and cameramen and a touched Jacqueline Mukansonera, Zura has unveiled the stele in her honour, has planted her tree (an olive tree) and has talked to people, touching the heart of all presents.

(to be continued in the next episode) 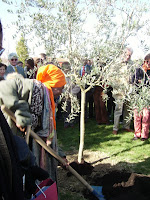 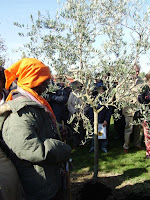 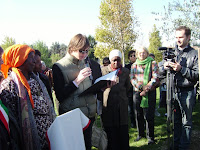 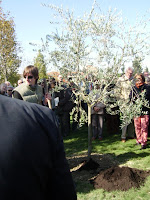 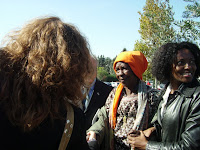 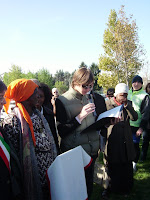 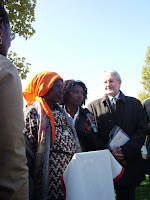 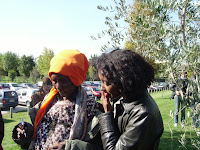 Posted by bene rwanda at 4:48 PM No comments:

THE GARDEN OF THE RIGHTEOUS IN PADOVA/3 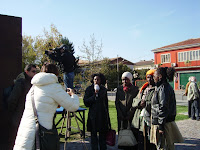 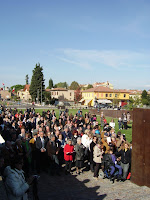 The iron wall divides the Garden into two parts: on the left, a plane portion, with metal sculptures and, on one end, some steps that bring to the Bacchiglione bank; on the right, a portion that gradually goes up to the same bank, along which the Righteous trees are planted. 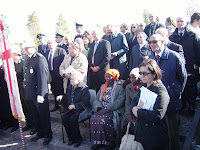 2009 ceremony in honour of the Righteous has been opened on the steps, in the presence of the town gonfalon, by the town mayor, Mr. Flavio Zanonato and by Prof. Giuliano Pisani, in the presence of the Righteous and their relatives. Melodies echoed in the air, diffused by loudspeakers put in every corner of the park, by the Chorus of Treble Voices Cesare Pollini and by the Iris Ensemble Chorus, directed by Marina Malavasi, with the musical accompaniment of Alessandro Kirschner. Several medias were present: besides Beppe Grillo’s blog, there were RAI and the Turkish channel DHA. 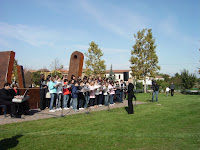 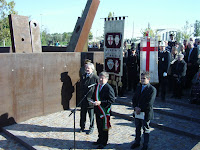 Posted by bene rwanda at 6:47 PM No comments:

THE GARDEN OF THE RIGHTEOUS IN PADOVA/2 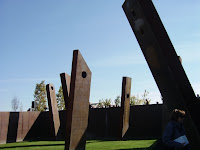 
....there were Ivanka Sukur, a woman who lost her husband during Sarajevo siege, during the Balkans war, and Elvis, the one year and a half old child (he’s now a young boy aged 17), who was rescued from certain death by Ivanka in 1993, in Bosnia-Herzegovina. There were also all the other personalities, of whom I will tell you later on.
The ceremony in honour of the Righteous was foreseen for Sunday morning, at around 11.30. But on Saturday, we agreed with Filippo Pittarello, who’s a member of Beppe Grillo’s staff, to make an interview for the blog, in front of the basilica of Saint Anthony of Padua. Therefore, around 10, we went “in front of the Saint” (as they say in Padua) and we made the interview, that will be issued in the next days on Beppe Grillo’s blog, the more visited site in Italy and the seventh more visited site in the world! http://www.beppegrillo.it/ .
At 11, we went to the Garden of the Righteous, which is in Via Forcellini. The site that hosts the Garden of the Righteous Worldwide borders on a bank. The Garden will continue along this bank and, following the natural course of the river Bacchiglione, it will reach the Adriatic Sea, creating a kind of Righteous Path. At the entrance of the Garden, there’s an iron wall, where this inscription stands out: “You can always say Yes or No”. On the other side of the road, the Internment Museum and the Unknown Prisoner Temple stand out. By the position of these two monuments, Padua wants to remember the victims of lagers and concentration camps on one hand and, on the other, people who, in the horror of genocides, have made a choice: they saved human lives instead of killing them, they said yes to non-violence and no to violence, they said yes to the courage and the dignity of good and no to the banality of evil.
(to be continued in the next episode)
Posted by bene rwanda at 2:06 PM No comments:

THE GARDEN OF THE RIGHTEOUS IN PADOVA/1 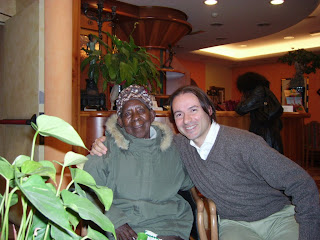 last Sunday, October the 18th, myself, on behalf of the Association Peace Culture!, and Françoise Kankindi and Eric Wibabara (with their little son Alain) for the association Bene-Rwanda, we had the chance to participate to a very important and touching event, organized by the Garden of the Righteous Worldwide in Padua, a park created in 2008 in Padua, to honor people - the "Righteous" - who opposed themselves to genocides. (http://it.wikipedia.org/wiki/Giardino_dei_Giusti_del_Mondo)
Among the Righteous who received the prize this year, there was Zura Karuhimbi (our candidate to the Peace Nobel Prize 2010, together with Yolande Mukagasana and Pierantonio Costa) and Jacqueline Mukansonera, the woman who saved Yolande during the genocide in 1994. It was this year the second edition.
Since Saturday afternoon, we've been hosted by Prof. Giuliano Pisani, responsible of the municipality of Padua for the Garden of the Righteous, who started thinking, in November 1999, that the Garden of the Righteous in Padua could become a reality and who saw his dream come true, 9 years later. Prof. Pisani put everyone at ease, with his warm welcome.
On Saturday evening, we had dinner at Pontecorvo Restaurant: along the big table were sitting many personalities (or their relatives) you can find in books of history, such as Misha Wagner, son of Armin Wagner, the German Righteous who denounced, by his photos, the genocide of Armenians at the beginning of the century; Gunter Burger, councellor for Foreign Affairs in Fribourg, Germany, who was there to receive the prize on behalf of the Righteous Gertrud Luckner, who helped many Jews to leave Germany during Nazism...
(to be continued in the next episode) 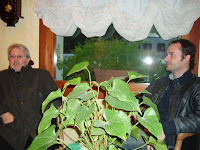 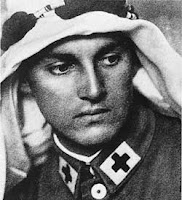 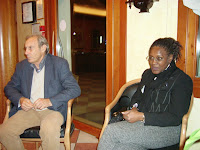 Posted by bene rwanda at 8:17 PM No comments: